Info for East Sussex and Kent clock Servicing and repairs.

Information about the restriction of watch parts and the brands effected

I am based near Hastings, East Sussex, convenient for customers in the South East of England and London.
Robert Wren M.B.H.I.
Telephone 07774 750 722 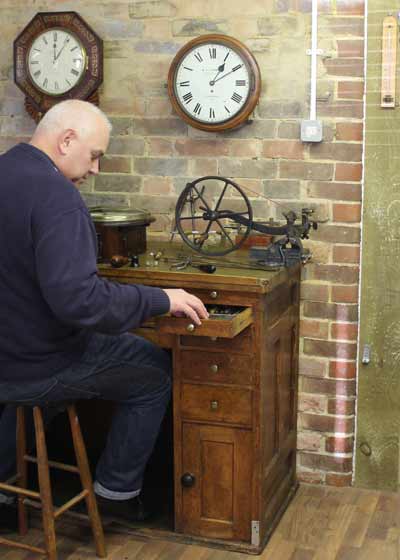 My life time passion for horology started in 1975, working after school in my Uncle's workshop, in the Old Town of Hastings. Two years later, I embarked on a five year apprenticeship with Arthur Wren & Sons. Self-employment soon followed and in 1985 I opened my own shop restoring and selling clocks and watches. In 1995 I decided to improve my knowledge in early horology and studied for two years at West Dean College under Roger Still and Frank Smith. Upon graduating I worked for Derek Roberts Antiques, later becoming Manager. During this period I also worked part time for other institutions, including Christie’s, Bonhams, the British Museum, working on pre-balance spring watches and West Dean College as Assistant Tutor on the Conservation & Restoration of Antique Clocks programme. In 2012 I returned to self-employment, working and dealing in fine antique clocks, assisting clients with their collections and as a consultant at Christie’s, Kings Street, London.

I am a Liveryman of the Worshipful Company of Clockmakers, a member of the Antiquarian Horological Society, the British Horological institute and the British Watch & Clock Makers Guild and regularly attend their lectures and events. Recently I have been fortunate to have been part of a team who dismantled, logged, packed and moved the Worshipful Company of Clockmakers collection from the Guildhall Museum to its new location in the Science Museum, London. Robert Wren M.B.H.I.