The Rolex serial number is located on the outside of the case between the lugs , the bracelet has to be removed to read it. 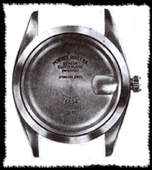 Rolex Serial Number Notes
Completely accurate serial number to date of manufacture cross reference is impossible to obtain. However, this serial number list, with noted variations, is believed to be the most accurate available.

According to information on the WatchNet website, Rolex reached the production number of 999,999 in the early 1950's. Rather than going on to a seven digit system, they started over with serial numbers at 100,000. During this period, Rolex also stamped the inside caseback with production information. Look for the Roman numerals I, II, III, IV ( which denotes which quarter of the year the watch was produced) and a two-digit date code during the 1950's.
In the late '50's, Rolex again reached the 999,999 production serial. This time, they moved into the seven digit serial number system. When Rolex reached 9,999,999, they began using letters as the initial serial identifier. Initially, they used "R"," L", "E" & "X" (O was not used because it might be confused the number 0).
In 1991, Rolex began using other letters [CSWTU, etc]. Early in 1999, "A" became the initial serial identifier. The "A" series was still being used into the first part of 2000, as were "N" & "P".

According to James Dowling, coauthor of The Best of Times: Rolex Wristwatches, serial numbers with "S", "T", "W" and "U" run concurrently -- though some were introduced as early as 1993. In addition,"A" was introduced in late 1997, and ran concurrently with "W" and "U".

One additional note of interest: Replacement cases FROM ROLEX will usually (if not always) have a 4,4xx,xxx serial number, no matter the model. This is a standard for Rolex Service Centers to immediately identify an authentic replacement case.

Here is the "Rolex Serial Numer List - Handy Quick Reference" for estimating date of manufacture for Rolex oyster watches from the 1950's through the first quarter of 2002: